Avid hikers and mountaineers will have to begin thinking twice before climbing the largest mountain in the world. Not just because Mount Everest has an elevation above 29,029 ft (8,848 meters) and temperatures go much below zero degrees, but past climbers have been leaving garbage in measurements of tons on base camps and routes. Furthermore, the issue does not simply lie within the climbers, but also with the lodgers around the mountain who burn toxic pits of garbage.

In the case of Mount Everest’s trash, proper methods of recycling or disposing of waste are not deemed financially viable or are ignored. Organizations are currently grouping together to combat the waste issues. As well, individuals can also learn and practice what to do to hike sustainably.

Mount Everest is located at the border of Nepal and China, where the two countries share the mountain. It is part of the Himalayan mountain range that extends to around 1500 miles (2,400 kilometers) from Afghanistan to Bhutan. The mountain is estimated to be around 60 millions years old. 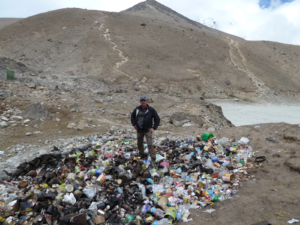 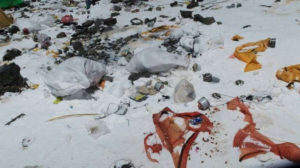 Where is the Trash Coming From?

A mountaineer spends an average of two months hiking to the top of Mount Everest. For starters, it takes an average of 40 days for the human body to adjust to its high altitudes and freezing temperatures. These mountaineers carry with them fluorescent tents, climbing equipment, gas canisters, oxygen tanks, eating utensils, and other camping equipment, which they leave behind throughout their excursion. Due to this, random piles of Mount Everest’s trash can be found along trails and camp bases. Even bags filled with human feces have been left behind, with an estimate of 12,000 pounds sitting on those steep, frozen slopes.

But the issue does not stop there.

Lodgers at the base of the mountain burn pits of trash that can be as large as 270 square feet to 2,150 square feet. The trash includes plastic, beer cans, glass bottles, paper products, etc. Burning these pits of garbage have negative side effects. Poisonous gas is released into the air and chemicals seep into the water once buried. The Lodge owners avoid recycling because of the expense.

Rules of waste management have not been well-enforced in Mount Everest. Troy Aupperle, an experienced mountaineer, explains to Live Science the difference visiting the different mountain sites. He describes Everest as a free-for-all. “Compare it to Denali,” the 20,310-foot (6,190 m) mountain in Alaska, he says, “They grill you — ‘What have you done?’ ‘Are you worthy of climbing this mountain?’ Then, they lay out all these ground rules.” On Everest, “There’s no rules, no accountability, no nothing.”

Waste management Issues are not just in Mount Everest

The struggles of waste management allocation and maintaining is more-so predominant in the streets of Nepal. The issues that arise with the waste management in Nepal can be seen with the way that their environment such as Mount Everest is being taken care of.

Jacob “Kobi” Azoulay, of the New Spotlight Nepal, writes about the problem increasing on the streets of Kathmandu. He writes, “The city streets are covered with piles of plastic and organic waste alike. Seeing stray dogs and wild monkeys sift through these piles for food is a common sight. Even the sacred Bagmati River is polluted by trash piling upon rocks and aside the ritualistic cremation of bodies at UNESCO World Heritage Site, Pashupatinath Temple, an important ceremony for Hindus saying final goodbyes to their loved ones.” The article was written in July 2018. Spotlight Nepal 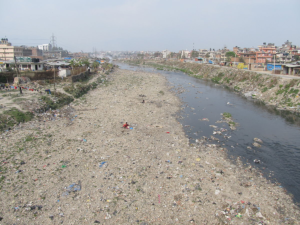 Binod Joshi, a writer from The Kathmandu Post, writes an article in December 2018. He describes the kinds of waste issues that are prevalent to this day. “The most significant challenge still remains managing unsystematic land filing of waste as well as illegal dumping of waste into rivers and lake which has caused environmental and public health problems. Further, the dumping of e-waste—mainly computer waste—commonly called green passport waste, too has exacerbated the waste management in the country.” He does, however, give various solutions and ideas for how Nepal and their organizations can better handle the waste with management and technology. Kathmandu Post

Luckily, steps are being taken to control the issues surrounding Mount Everest’s trash. The Sagarmatha Pollution Control Committee (SPCC), a nonprofit organization that manages the Khumbu region, and locals are currently maintaining the routes. They have also installed 70 trash containers and go door-to-door for garbage collection. Also, the Nepal government’s tourism ministry has declared that climbers of Mount Everest must return with an extra 18 pounds of garbage after their journey.

What’s more is that organizations of all kinds have been campaigning and working together to get Mount Everest Clean. Organizers and volunteers have also campaigned back in early 2018 to transport 200,00 pounds of Mount Everest’s trash. One organization, the Mount Everest Biogas Project, aims to collect garbage from a village known as Gorek Shep, where they will recycle the human waste using an anaerobic digester system that uses bacteria and a water mixture that would break it down with a sustainable process. Another organization, Sagarthmatha Next, collects trash from villages to create art. 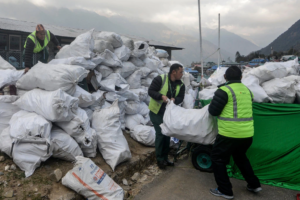 The SPCC has a list of rules titled, “Waste Management Rules for climbers and expedition groups in Khumbu”. This is found on their website under ‘Our Works’. It requires mountaineers to visit their office before heading towards the base camps. Visitors must follow rules such as dividing garbage, proper collection of human feces, not painting on the rock, and more. Their rules appear to confront many of the prevalent waste issues known to plague Mount Everest. Hopefully, these rules will maintain and prevent further damage of Mount Everest’s environment and people will become more respectful towards the beautiful, giant natural wonder.