New ideas for plastic recycling. PureCycle is a newly plastic recycling company that uses an innovative technology to recycle polypropylene, a type of plastic resin, into plastic products and packaging that appear new. By producing seemingly virgin polypropylene resin, PureCycle contributes to moving the U.S. economy to a more circular model. IDEAS for Us recently spoke with Rachel Dial, Chief of Staff of Sustainability at PureCycle, about her company and the new branch that’s opening in Orlando.

How is Polypropylene Traditionally Recycled?

While there is a need for this type of recycled plastic, Rachel Dial explains that these limited uses aren’t going to move the needle on the hundreds of billions of pounds of virgin plastic production in demand today.1 The technology used by PureCycle, developed by Proctor & Gamble, could change this. In the coming years, PureCycle may be able to produce more recycled, high-quality plastic to decrease plastic pollution in our waterways and to reduce the planet-heating emissions caused by generating virgin plastic.

Traditional polypropylene recycling methods generally melt down polypropylene plastic of different colors, which combine together to turn the resulting resin black.1 Given that the recycled resin from this method is typically black, there are narrow applications for recycled plastic of this sort.

Another approach is to use chemical reactions to convert waste plastic into fuel with which to form new plastic.1 This second technique is quite energy intensive.1 The process used by PureCycle shows significant improvements compared to both these traditional recycling systems.

How Does PureCycle Innovate New Ideas for Recycling Polypropylene?

Proctor & Gamble, a consumer goods company, set out to find a better way to recycle the polypropylene used in its packaging. Dr. John Layman of Proctor & Gamble developed a technology based on dissolving waste polypropylene in a special solvent through a primarily physical process rather than chemical reactions.1

When the polypropylene is dissolved at PureCycle, the other impurities are extracted from the solution, and afterward the polypropylene is separated from the solvent to produce a like-new resin. As the process is mainly physical rather than chemical, PureCycle’s technology uses considerably less energy than other chemical recycling methods. Crucially, the process results in a virgin-like polypropylene resin without impurities, rather than a lower-quality black resin produced from older technologies the melt plastic together.1

To describe how a solvent-based technology can produce virgin-like resin, Rachel Dial compared the process to separating out salt and pepper that had been mixed together. The salt represents the pure polypropylene resin, and the pepper represents the other impurities and additives. When the salt-and-pepper mixture is put into water, a solvent, the salt dissolves and the pepper doesn’t, so the pepper can be strained out of the solution. Similarly, when polypropylene dissolves into a solution using a solvent, the other impurities can be removed. Finally, in the salt-and-pepper example, once the pepper has been strained out of the solution, the water can be evaporated off, leaving pure salt. Polypropylene can also be separated from the solvent once the impurities and additives are removed.1 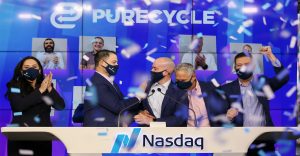 How Competitive are PureCycle’s New Ideas for Recycling Plastic with Virgin Plastic?

There’s currently a sizeable demand for recycled plastic with virgin-like properties from companies with sustainability promises and goals.1 PureCycle intends to meet this demand by recycling polypropylene plastic into like-new resin. Rachel Dial indicated that the cost of producing PureCycle’s recycled polypropylene is similar to that of producing new plastic directly from fossil fuels, and that the cost will drop as the company gets off the ground.1

In terms of sustainability, PureCycle’s recycled polypropylene is vastly preferable to virgin plastic. To begin with, recycling plastic diverts plastic waste from the landfill and our oceans, mitigating our substantial plastic pollution problem. Secondly, PureCycle’s method should require only one-fourth the non-renewable energy used to generate virgin plastic in the production of PureCycle’s recycled plastic.1 PureCycle can help close the loop in the circular economy of plastic generation with its like-pure recycled polypropylene.

What Are PureCycle’s Plans for Its Plant in Orlando?

While the purification of waste polypropylene will take place in PureCycle’s plant in Ironton, Ohio, which is still under construction, PureCycle plans to open a plant in Orlando for the preparation of plastic waste prior to purification.1 Before waste plastic can be recycled through PureCycle’s solvent-based system, it needs to be washed, sorted, and densified.1

Densification is the process of packing down the plastic into denser material, so that it can be shipped to the purification plant sustainably and economically.1 Rather than shipping a load of voluminous empty milk jugs, for example, PureCycle can densify the load so that fewer trucks and fewer vehicle miles traveled are required.1

The Orlando plant will be involved in the preparation of plastic waste from Florida through the washing, sorting, and densification of that plastic to be recycled.1 Sorting the plastic is important, because PureCycle’s recycling purification system only treats polypropylene, just one of the many types of plastic, if the most used.

How Do PureCycle’s New Ideas for Plastic Recycling Address the Plastic Waste Crisis?

Although dramatically less plastic should be produced overall to solve the plastic waste crisis, PureCycle plays an important role in recycling the plastic that society may always need. By producing like-new polypropylene from plastic that is thrown away, PureCycle inches the economy closer to circularity. PureCycle’s innovative technology will keep plastic out of our oceans, rivers, and landfills. Although PureCycle isn’t the full answer to our plastic waste problems, the company is part of the solution, and will help create a more sustainable world.

PrevPrevious ArticleWhy should you Propagate Sustainable Development Ideas Online?
Next ArticleHow to Go Waste Free to Fight Your Climate AnxietyNext