The city of Key West, one of Florida’s most visited cities, has joined Hawaii and the country of Palau to ban sunscreen lotions with the chemicals oxybenzone and octinoxate in efforts to protect their own coral reefs. Oxybenzone and octinoxate are commonly used chemicals in most popular, store brand sunscreens. The ban had been approved by the City of Commission from a 6 to 1 vote in February 2019, where it will go in effect on January 1st 2021. The decision was based on multiple studies and research on chemicals in sunscreen and their effects on the coral reefs. Hawaii has banned the same chemicals in 2018, along with Palau with an additional 8 chemicals. It has obtained backlash from some trade groups and dermatologists, but environmental researchers and administrators of regions who depend on their coral reefs look forward to pushing tourists and manufacturers towards sustainable sunscreens. With both chemicals that have been banned, the interests in studies and research focus more distinctively on oxybenzone as a toxic chemical in both the environment and people. 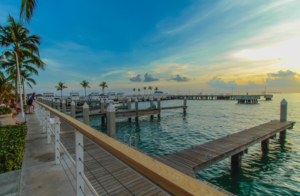 Key West and their Florida Reefs

Key West is a popular tourist destination located at the southern most tip of Florida with an annual estimate of 2.5 million visitors per year. Tourists and residence take part in a variety of activities that include, but are not limited to, visiting the beach, exploring historical sites, sailing/parasailing, canoeing, snorkeling, shopping, and watching the sunset. One of the biggest attractions that Key West has to offer are their barrier reefs, which is the third largest barrier reef ecosystem in the world. It runs 150 miles and is home to thousands of marine life. The University of Miami estimates the Florida reef is worth 7.6 billion in revenue from tourism and the commercial seafood industry. The Key West also has an average high of 83 degrees Fahrenheit to a low 73 all year round, which provides warm temperatures for beachgoers and divers throughout the year.

Teri Johnston, the Mayor of Key West, spoke for the ban of sunscreens, stating the coral reefs were a crucial component of the local economy and the environment. “Our coral has been under attack by a number of stressors. We just thought if there was one thing we could do, to take one of the stressors away, it was our responsibility to do so.” A system is being set up for those who do not follow the ban. First time offenders would be warned. Second time offenders would be faced with fines of unknown amounts. She did add that people with medical prescriptions would be exempt from the ban.

What is Oxybenzone and Octinoxate and How Does it Affect People?

Oxybenzone is an ingredient that is used as a ultraviolet filter for 70 % of sunscreens and personal care products. It also helps other ingredients penetrate the skin better. Octinoxate is sulfuric acid mixed with methanol that is also used as a UV filter.

Most research conducted related to sunscreen toxicity has been directed at oxybenzone. It has been not been reviewed by the Federal Drug Administration (FDA) for potential toxicity; however, it has been reviewed by the Environmental Working Group (EWG), which is a non-profit that specializes in research and education on creating and empowering healthy people and healthy environments. Their 2018 sunscreen database states oxybenzone exists in 65% of non-mineral sunscreens, it can cause allergic reactions (Rodriguez 2006 study), and it is a weak estrogen with anti-androgenic effects (Krause 2012, Ghazipura 2017 studies). The Centers for Disease Control reports 96 % of the American population has oxybenzone in their system, especially those who use more sunscreen. A study by Scinicariello in 2016 with CDC data found that adolescent boy with higher oxybenzone exposure have lower levels of testosterone. Lastly, oxybenzone has been reported to be connected to low birth weight in female babies and high birth weight in male babies.

Octinoxate still continues to be a relevant concern in the medical industry. Studies have been conducted with animals and the environment. The effects on these two subjects have been well documented, but human effects are not as documented. In animal testing, octinoxate has negatively affected fertility and uterus size. Testing has strongly identified octinoxate as an endocrine disruptor. In humans, people have been known to have skin allergies, but research on internal effects is limited. 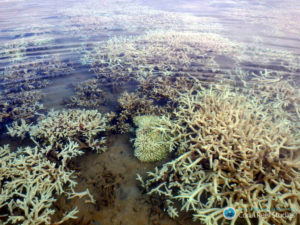 Studies on the Effects of Sunscreen on the Coral Reefs

Multiple studies, including one 2015 study involving the research and expertise of UCF Professor and Biologist John Fauth, confirms that the chemicals in sunscreen have been damaging the coral reefs. The team from the 2015 study was led by executive director and researcher Craig Downs of Haereticus Environmental Laboratory. The study “Toxicopathological Effects of the Sunscreen UV Filter, Oxybenzone (Benzophenone-3), on Coral Planulae and Cultured Primary Cells and Its Environmental Contamination in Hawaii and the U.S. Virgin Islands” focused on oxybenzone, a common and popular sunscreen chemical. It was first published October 20th, 2015. The reefs that were collected in the study are from Hawaii, U.S. Virgin Islands, and Eliat, Israel. The abstract of the study states that oxybenzone is an ingredient in sunscreen lotions that protects against the effects of ultra-violet rays; but, it also acts as a genotoxicant (genetic mutations) that has been observed to transform the larval form of coral (Planula) into a “deformed, sessile coral”. The planulae also experienced an increase in coral bleaching in response to an increase in oxybenzone. Oxybenzone seems to have a positive relation to DNA-AP lesions and induce ossification where the planula encases itself in its own skeleton.  Ossification also prevents the planulae to float and disperse with the currents, so they could spread and populate.

The Environmental Toxicology study on Oxybenzone from Downs 2015 study:

Other studies have observed the effects of sunscreen products on coral larvae and colonies of organisms found at the shallows of coral reef. The first coral bleaching study in 2008 was led by Danovaro with a series of experiments. The coral reefs were incubated from multiple sites, including Indonesia, Mexico, Thailand, and Egypt, with different aliquots of 10, 33, 50, and 100 microliters of sunscreen. Within 18 to 48 hours, all the reefs had released large amounts of coral mucous, and by 96 hours, all had suffered complete bleaching. The individual organic compounds of sunscreen that were tested had the full effect of coral bleaching at the lowest aliquot. These were butylparaben, ethylhexyl methoxycinnamate, oxybenzone and 4-MBC. A 2016 study by McCoshum observed that flatworms, symbiotic algae, soft corals, glass anemones, and diatoms decreased in population compared to the controls when exposed to sunscreen. The 2017 technical report by Sharp had observed that organic sunscreen and mineral based sunscreens (usually zinc or titanium dioxide) had decreased the ability of coral larvae to establish settlements significantly, but did not cause significant larval mortality. However, some sunscreens are polymer-based and active ingredients will not disperse until after a 24-28 period, so it made it difficult to test some products.

The Verdict on Coral Bleaching and Sunscreen

The International Coral Reef Initiative and International Year of the Reef 2018 have formally reviewed the multiple studies conducted regarding sunscreen and coral reefs. They state “Considering the many stresses already faced by reefs and current concerns about the toxicity of certain components of sunscreens to corals, a proactive and precautionary approach to dealing with this issue may be required. Reducing the amount of harmful sunscreen components that reach the reef environment is a high priority and will require the involvement of governments, reef managers, divers, snorkelers and swimmers, and the tourism and pharmaceutical industries.” They concluded that oxybenzone, benzophenones, camphor derivatives, and cinnamate derivatives are endocrine disruptors that cause deformation, immobility, and death. Oxybenzone is also a genotoxic that damages the coral’s lifespan, immunity, and reproduction. They did affirm that there were knowledge gaps and further studies to be made on the effects of sunscreen on a reef community level, and the wider impacts of sunscreen and their UV filters.

The results from the studies conducted by multiple teams have provided some insight into sensitivities of our delicate coral reef ecosystems. Human beings need to be careful of what they put out into the world, where the consequences of our actions will always come back to us in many forms. 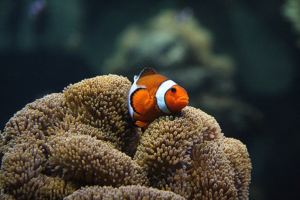 Sunscreens That are Reef Safe

The state of Hawaii has already began to push their sustainable sunscreens. There are many kinds of sunscreens that can be found in common retail stores that do not contain oxybenzone and octinoxate, where some of these brands are of Hawaiian brands.

Here is a list of sunscreens collected by Hawaii.com that are believed it be safe for the ocean: