Fracking in Florida: What To Know

What the Frack Florida!

Fracking vs. Environmentalists has been a long fought battle for years over the fracturing of the Earth for resource gain. So, do environmentalists have a fighting chance in finally defeating fracking in Florida? Now, let’s dive into the history of fracking to learn more and make your own determination.

Simply put, fracking is a method using pressurized liquid to fracture rock and obtain natural gas or oil. By definition from the Environmental Protection Agency, Fracking can be defined as  “the process of drilling into host formations (shales and tight sandstones) and injecting fluids and sand under pressure great enough to fracture the rock formations to allow the extraction of oil and gas.”(1)

Interestingly, fracking is linked all the way back to 1865. Civil war union veteran Lt. Col. Edward A.L Roberts created what is known as the “exploding torpedo.” This metal encasing filled with powder was lowered into a well and then released, uncapping the encasing and exploding underground. Then, oil flows freely from the fractures of rock. However, it wasn’t until 1949, when Halliburton Oil Well Cementing Company received an exclusive license to start hydraulic fracking, originating in Stephens County, Oklahoma and Archer County, Texas, that fracking hit the ground running and began heavy commercial use.

Since then, according to the U.S Environmental Information Administration, the United States has grown to have 1 million oil and natural gas wells. These wells produce 108.58 billion cubic feet per day of natural gas and oil.  Fracking has rapidly increased since the 1940s. Many states have taken a stand against this method of extracting fossil fuels. Notably, Maryland and Virginia have permanently banned fracking and many counties and cities have already enacted local bans or temporary bans. Likewise, Florida also recently banned offshore drilling.

“Picture of one of the first fracking sites in 1949 in Oklahoma.” American Oil & Gas Historical Society, 1 Sept. 2007, https://aoghs.org/technology/hydraulic-fracturing/.

Presently, fracking is considered “cleaner” in comparison to other fossil fuel plants. Comparatively, it produces less pollution and carbon dioxide into the atmosphere. While that may be true, its problems lie elsewhere such as continued environmental impacts and methane gas emission. According to the NRDC, heats up the earth 80 times more than carbon dioxide.

Fracking’s continued air pollution not only leads to climate change but also health risks when breathed in by animals or humans. “Research has linked pollution from fracking to unhealthy levels of smog and toxic air contaminants”, says the NRDC (2).  Furthermore, these contaminants such as carcinogens, hydrogen sulfide, diesel particulates, and VOCs can lead to respiratory problems, nervous system impacts, birth defects, blood disorders, and cancer.

Fracking pumps thousands of gallons of water into the ground to create cracks and obtain natural gas. The water, chemicals and toxins left after the oil and natural gas has been extracted are called flow back or fracking fluids. These fluids are sucked back up through the well. This flow back has no use and companies must find a place to displace it. This creates problems.

One solution has been to pump it deep into wells underground, leaving it there forever. However, this method has been known to cause earthquakes such as one in Ohio in March 2014. The magnitude three earthquake, caused state officials to close the well two days later. (3) .  The fracking site in Ohio was near hidden fault lines. Fracking near the fault line fractured rocks on or near it. This caused the fault to rupture and created seismic activity. Significantly, Ohio had never experienced earthquakes before fracking began.

Even more pressing are health risks from wastewater.

All in all, fracking uses and exposes many toxins that can be either radioactive or corrosive and harmful to the health of humans and surrounding life. Similarly, fracking fluids stored incorrectly, or spilled can deplete oxygen from waterways, causing algal blooms and harming aquatic life. Ultimately, these chemicals can contaminate drinking water, exposing humans to chemicals that can cause cancer or other health risks.

As of 2018, according to the Environmental Information Administration, Florida has 39 gas producing wells. Most of the natural gas production comes from the Jay field in the Florida panhandle. The EIA states that “Geologists believe economically recoverable natural gas reserves may lie offshore in the eastern Gulf of Mexico, but Florida has banned exploratory drilling in state waters in that part of the Gulf, and the federal government has placed a moratorium on exploration in federal waters in the eastern Gulf through June 2022.” (4). So far natural gas production in Florida has been dwindling because of these temporary bans that could be storing most of Florida’s natural gas reserve areas.

How Fracking Has Affected Florida

Once the fracking process begins, the pressurized fracking water breaks up the porous rock. This allows for natural gas and the fracking fluid to quickly move towards the surface water. Because the rocks are so permeable, they have many pores gas and liquid can travel through.

Another way these aquifers could become contaminated is through natural disasters such as sinkholes.

From the TampaBayTimes in 2016: “A massive sinkhole that opened underneath a gypsum stack at a Mosaic phosphate fertilizer plant in Mulberry may have dumped at least 215 million gallons of contaminated water into the Floridan Aquifer over the past three weeks, company officials say.” (5). Overall ,these natural disasters might not happen often, but the effect they have on our communities is detrimental.

Who Are The Major Players in The Florida Fracking Business?

Currently, big companies like investor-owned natural gas utilities and energy companies are itching to get a hold of production of natural gas along the gulf coast. Presently, many have a stronghold on gas production in Florida. Companies such as “Spectra Energy Corporation, NextEra Energy Inc., Duke Energy, and Florida Power & Light completed the construction of the Sabal Trail Transmission pipeline” (6). This pipeline was approved by the EPA, “despite admitting the inevitable negative impacts to the Floridan Aquifer” (7).  Indeed, it is up to us to stop supporting natural gas companies and start supporting renewable energy companies and sources.

Now, many businesses and organizations have already joined the cause like  Florida Renewable Energy Association and Floridians Against Fracking, who are non-profit organizations that seek to move Florida into a renewable future. Furthermore, part of the Florida Renewable energy Association is to “actively encourage networking by providing event services and online capabilities to members and their clean energy projects.” (8).

Formed in 2014, Floridians Against Fracking has petitioned, volunteered, shown legislative advocacy and created a mission against fracking in Florida.

We as Floridians have the power to seek justice and determine what happens on our coast and in our backyard. Now, look below for a few things you can do to help end fracking.

What YOU can do: 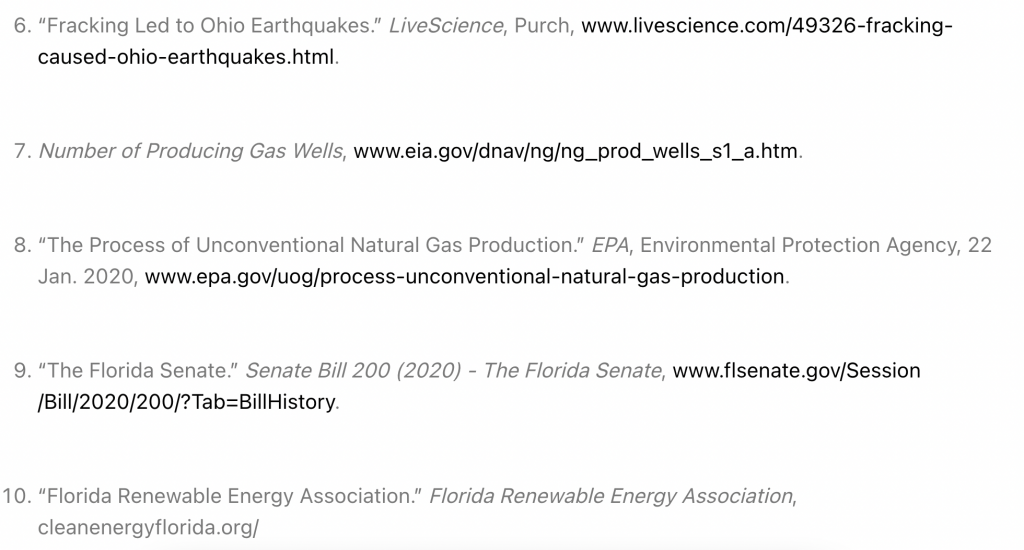 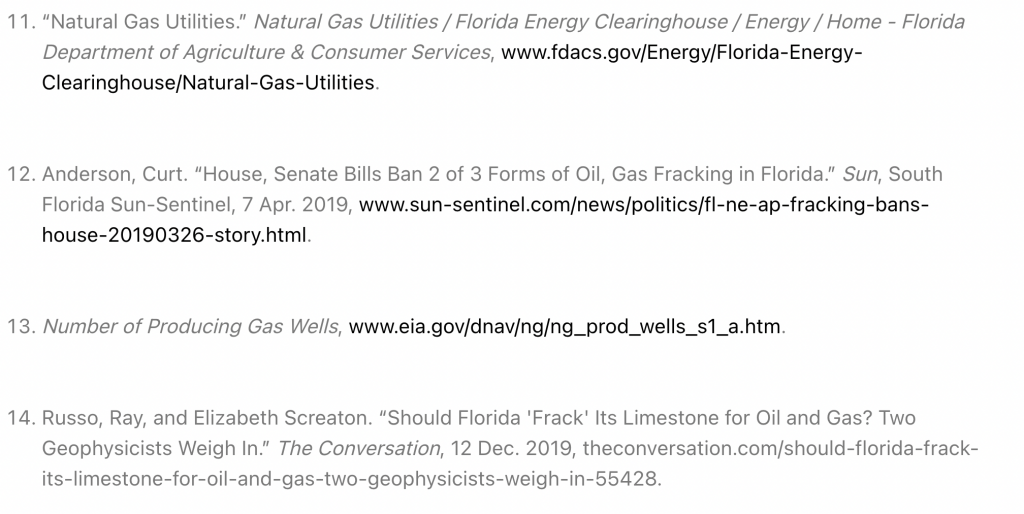 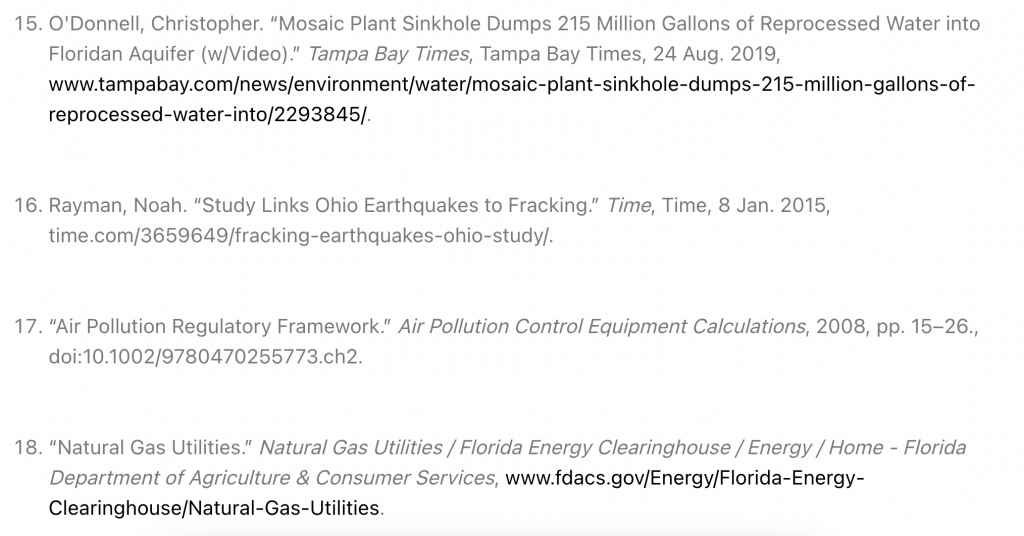