California Wildfires: How They Started, Where We Are, and the Next Steps

California Wildfires: How They Started, Where We Are, and the Next Steps

California Wildfires. The wildfires in the State of California have been a hot topic this year. Seemingly in the midst of a presidential election and global pandemic, many people have forgotten about California and its struggles recently with wildfires. Wildfires can be a natural occurrence in nature, but when they spread in an uncontrolled manner they have the ability to destroy large areas of land and to ruin livelihoods along with it. Like most other phenomena today, climate change is a driving factor in the continued spread and reoccurrence of the wildfires in California. With this, it is important that we take the critical steps in understanding how the wildfires start, how they spread, and what we can do to stop them.

The Status of Wildfire Occurrences in the U.S.

Wildfires are sweeping patches of fire that spread through dry, arid grasslands, foothills, and mountains. Up to 38 states in the United States are at risk for wildfires annually, with California being the state most associated with the wildfires due to eight of the ten most costly fires in U.S. history having occurred there (2). Interestingly, as much attention as California receives for its struggles with the fires, Texas often has double the number of wildfires that California has in a given year (2). The problematic part about wildfires, aside from the destruction they cause, is that we are seeing more and more of them each year. From January 1, 2020 to November 3, 2020, we had over 47,500 wildfires in the United States. This can be compared to the 44,929 that we saw in the same period of 2019 (4). The sheer number of fires also manifested itself in a greater number of acres being burned in 2020 compared to 2019, with 8.6 million and 4.6 million acres burned, respectively (4). The reason that we have focused so greatly on California’s wildfire struggles is due to the number of fires in the state compared to others at the moment. Thus far through 2020, we have already seen six of our twenty largest fires to occur in the Golden State (4), a number that we should look to bring down if we want to continue to enjoy the natural beauty that California offers.

Perhaps the most troubling aspect of wildfires is that it only takes a spark to cause mass destruction. A spark can be caused from a variety of factors including burning embers from campfires, intense heat, and even lightning. However, a majority of the wildfires in the United States are caused by human activity/error. Interestingly, even though wildfires are categorized as natural disasters, it has been found that only 10% – 15% of wildfires occur on their own, meaning that we humans are responsible for the mess that we have created (5). Usually when a spark occurs and oxygen and fuel are both present, a wildfire is started. The “fuel” that is being referred to can be grass, bush, trees, and other flora that are dried out and present on the surface. Dry weather and droughts are common in areas affected by wildfires. In a dry season, the plants in the area can dry out and become that “fuel” that was previously mentioned. Once you combine the systemic issue of drought along with human interference, it is easy to see why these fires can start so easily. All it really takes is one cigarette being improperly disposed of for a wildfire to be born.  Once the fire begins, it is often very difficult to contain. These fires are known to spread at speeds up to 14 miles per hour (5), enough to overtake most animals trying to flee. Because the fires are mostly due to human interference, we should look to avoid causing them as much as possible. Simple ways to reduce human-caused wildfires are properly putting out cigarettes and extinguishing campfire embers when done (6).

One of the larger inherent issues facing the fight against wildfires is how easily they spread. As we know, fire requires the presence of oxygen in order to continue burning. In California, the dry Santa Ana winds combine with the already active wildfires and can often “carry a spark for miles”, acting as a free method of transport for a spark looking to become a wildfire of its own (5). It has been found that as wildfires burn uphill, the heat emitted warms the “fuels” above, making it easier for those fuels to burn once the fire reaches them. As Accuweather found, once the “wildfires have wind to push them along and they are exposed to the right topography, the growing red inferno will burn everything in its path” (6). This represents an even larger problem for California as we piece together why they are so greatly affected by wildfires. Due to its location and topography, California is quite literally a hotbed for wildfires. California is the only state in the United States that has both extensive seacoasts, high mountains, and deserts (7). This allows for winds from the ocean to carry wildfires uphill and across mountain ranges throughout the state. Now that we have discussed how wildfires spread and why California is so prone to having them, it is time to look into the current methods of how we manage and contain wildfires. 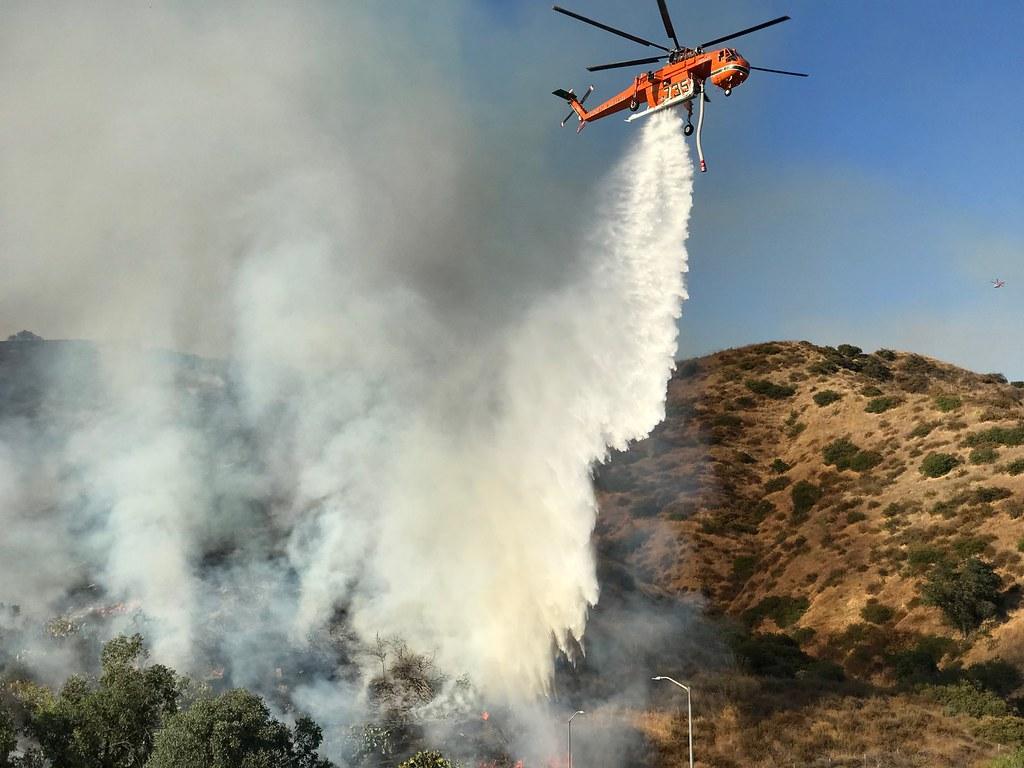 Firefighters Put out Flames from The Air (13)

It has also been found that firefighters “often work in teams, often called hotshots, to clear vegetation from the land around a fire to contain and eventually starve it of fuel” (5). By clearing the land around the fire and dousing the flames, firefighters can prevent the flames from spreading to fuel heavy areas where the fire could expand and rather quickly. One last way to prevent fires is to use backfires. Backfiring involves the use of controlled burns in order to rid the forest of undergrowth and other fuels that could potentially cause/expand a wildfire. Doing so could prevent the spread of wildfires across forests and other heavily wooded areas across the State of California.

The Solution? Education and Prevention.

In all, wildfires are nothing new. We’ve seen them come and go each year, with each coming season being worse than the last. Because wildfires can be deadly and destructive, we should aim to prevent them as much as possible. In addition, we as humans have a moral duty to do our best in effort to prevent these fires because more often than we are the ones causing the fires in the first place. Wildfires can spread quickly, and it only takes a small spark to cause a huge outbreak of flames. As previously mentioned, California is naturally prone to wildfires due to its topography and climate, which allow for the easy creation and expansion of flames across the state. In order to combat the flames, firefighters look to deprive the fire of one of its three components to prevent the flames from spreading; but what is more important is preventing the fires from beginning in the first place. Let’s all do our part to prevent wildfires from occurring, especially in California, so that we can all continue to enjoy the natural beauty that our plant offers.

To stay informed on the status of wildfires in California and to find simple ways to protect yourself and others, click here.

PrevPrevious ArticleEcoSPEARS Technology and the Fight for Clean Water
Next ArticlePlant-Based: From Cattle to CauliflowerNext