Cleaning Up and Recovery Oil Spill by Bioremediation

What is an oil spill?

Oil spill is the release of a liquid petroleum hydrocarbon into the marine ecosystem due to human activity such as tankers, barges, pipelines, refineries, drilling rigs and storage facilities 1. In April of 2010, the Deepwater Horizon exploded and was one of BPs biggest oil disasters that dumped over 210 million gallons of oil in the Gulf of Mexico 2. This explosion killed off over 150 endangered sea turtles and over 300 sea birds 2. Oil spills can be cleaned up through effective processes such as bioremediation, bioremediation accelerator, burning the oil, dispersants, dredging, skimming, and solidifying 3. This blog will illustrate the role of bioremediation in cleaning up and recovery the oil spill.

Bioremediation is a method used to treat water, soil, and subsurface material pollutants through changing environmental conditions to catalyze the growth of microorganisms and reduce the target pollutants 4. It uses microorganisms or biological agents to treat oil spills, and soils contaminated 4. Alcanivorax bacteria and Methylocella silvestris are the most effective bacteria that break down or remove oil spills 5. According to a scientific report, the strain of bacteria digests dangerous methane and other gaseous alkanes such as propane which could protect us from leaks like BP’s Gulf of Mexico oil spill in 2010 and curb global warming 5. According to Journal Nature, Methylocella silvestris is a type of bacteria that live in acidic soils and wetlands and can grow on the methane and propane that exist in natural gas 5. The reason why it can grow in methane and propane because it consists of two enzyme systems that harness both gases at once 5. Using Methylocella silvestris bacteria can reduce the greenhouse gases that can be released by oil spills and eliminate the impact of the methane and other gases.  before they escape into the atmosphere 5. In addition, Methylocella silvestris bacteria can grow very fast: one bacteria can be doubled every 10 hours 5. According to Predominant Growth of Alcanivorax Strains in oil contaminated and nutrient-supplemented sea water study, Alcanivorax bacteria is playing a major role in the bioremediation of oil-contaminated marine environments 6. It is becoming a dominant bacterial population in petroleum contaminated sea water when nitrogen and phosphorus nutrients were supplied in adequate quantity 6. 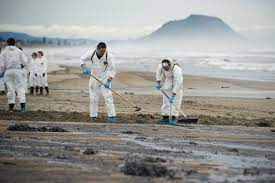